A couple of years ago, I took a fiction writing class through the UC Davis Extension program.  It was taught by Greg Glazner.  Eight Wednesdays in a row about fifteen of us writers-to-be met in a room and talked writing.  Every week we had a short story to read before class, except for one week when we had a handful of poems to read.  Ugh.  Poems.

There was one memorable poem in the punch.  One that was so powerful.  I was reminded of it last night as I sat watching a play at the B Street Theatre in Sacramento.  How We Get On by Idris Goodwin, about three teenagers growing up in suburban, middle America in 1988, trying to get in on the new hip-hop/rap scene.  It’s a great play.

At one point, one of the characters is talking to his father who tells him about a great black poet, Robert Hayden.  The son asks for a sample and his father recites Those Winter Sundays.  It’s still powerful.

Killed in the line of duty

Sitting in a bar

And who should appear?

But I want a tattoo 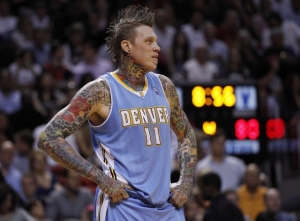 And the … again, well

Where would he be?

Up top, there’s a tab for The Irrepairable Past, which holds drafts of the first couple of chapters for one of my works in progress.  I’ve completed the first three chapters and am halfway there with chapter four and the final chapter.  There are two or three chapters between four and the last.  As I’ve written before, there are two major things that prompted this story.  One was reading a short story by a friend.  He wrote poetry for years and only recently had started writing short stories.  How he wrote was pretty incredible and I could see how poetry had influenced his efforts.  I decided to try something.  With each chapter of The Irrepairable Past, I begin with a poem that says something about what’s to come in the chapter.  I believe the writing in this story has been influenced by those poems — they set the stage for a different rhythm and pace.  Or maybe I’m just imagining it.

Anyway, here, for Day #18 of NaPoMo, is the poem that leads off the final chapter