At Amazon.com in paperback and for the Kindle.

At Smashwords as an e-download in pretty much every format. (Make sure you turn off the adult content filter to be able to locate the book.

It’s all about a man, a woman, lust, and vengeance.  Jack McGee, about to be married, has a one-night stand with the girl of his dreams.  He wakes up the next morning and leaves the scene.  Several days later, Jack is arrested for rape, after Lea, the woman he slept with, decides to get even for his departure and his participation in an effort to buy her family’s ranch.  The story follows Jack through the arrest, the pre-trial maneuvers, the trial, and the aftermath.  As I told a friend today who started reading it … the author has stacked the cards against Jack.  You’ll just have to read it to find out how it all ends up for good ol’ Jack McGee.

What are people saying:

Kathy:  This was a good story and had a very interesting twist to it I wasn’t expecting. I like when I feel differing emotions throughout a book. I get bored if I just love the character and never feel anything different. Or hate the character and never feel anything different. I ran the gamut of feelings about this character so it was a fun read. This author is going places and I look forward to his next book.  (5 Stars)

Porcupine:  I really enjoyed this story. The author blends a good story with personal experiences from his own travels. He is a skilled writer that knows how to capture drama and humor that left me wanted to turn the next page. I look forward to his next book.  (5 Stars)

Bonnie: This is one of the best books I’ve read in some time. It keeps your interest the entire time from beginning to end. No dead spots! It’s a fast read because it’s hard to put it down. I highly recommend it!!  (5 Stars)

And, two collections of short stories:  The Marfa Lights and Other Stories and Shady Acres and Other Stories.  And, as soon as I can figure out why I can’t upload the cover images, I’ll put them up here.  Until then…

Both collections are available on Amazon.com in paperback and for the Kindle.  Not yet available on Smashwords, but soon. 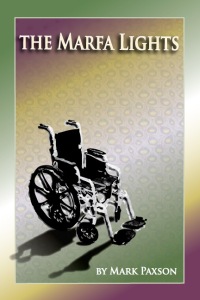 The lead story in The Marfa Lights is about a 14-year-old boy with cerebral palsy.  He has spent most of his life, essentially a prisoner in his home, living with his father and believing his father is his only family.  He wakes up one morning to find out his father has been killed and in the days and weeks ahead learns that most everything his father told him was a lie.  It’s based in Marfa, Texas, where there are these weird lights that appear and nobody can explain their cause … hence the title, The Marfa Lights.  That lead story forms the basis for a script I’m working on with my niece who hopes to make a movie of the story.  The script is in its third draft.   The collection includes 15 more stories.  Among those stories are The Smoker’s Club, which was published by The First Line, and The Ice Cream Man, which was published at toasted-cheese.com.  There is also Untitled, an end of the world love story told in rhyme, and, well, a whole host of other stories.

What people are saying about The Marfa Lights:

Kathy:  I enjoy reading this author very much. He has a real knack for telling stories. And each story is so diverse. I love that he can write The Final Days of Explorer X-12 and in the same book there is The Watcher and Maybe. I know this author is writing more and I can’t wait to read them.

After I completed that, I published Shady Acres and Other Stories. 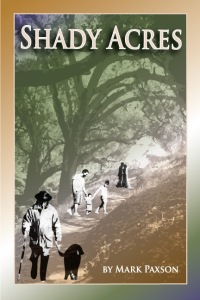 The lead story here, Shady Acres, is about the lives of the residents and families of an old folks home.  Spring 2010 found me participating in Story-A-Day, a challenge to write a story every day for the month of May.  I didn’t get 31 stories in, but what I did complete in that month was Shady Acres, a connected series of short stories about Mike Robertson, who turns 100 at the outset, and his fellow residents, the employees who work there, and the families of those residents who struggle with the consequences of placing their loved ones at Shady Acres.  My movie-making niece, at some point, wants to make a web series based on this story.  Also included in this collection are ten more stories, including another post-apocalyptic story, A Warm Body, that I hope will some day lead to a much larger story; Gramps’ Stereo, which won something at Review Fuse and was published at toasted-cheese.com; Sunbaked Sand, which was published by The First Line; Jeopardy, one of my favorite stories; and Getting Through the Night, a story that I affectionately describe as plumbing the absolute depths of despair.

What people are saying about Shady Acres:

G. Byrge: “Shady Acres” is a bittersweet, moving story about some of the residents at Shady Acres, which, as the name implies, is a place were old, infirm people go to die. The author obviously has some experience with nursing homes, as he captures the daily routine and describes the “inmates” (my word, not the author’s) with such attention to detail. But most of all, he evokes the emotion connected with adult children facing the decision to place Mom or Dad in such a place, as well as the feelings of the elder. The other stories are just as well-crafted and definitely worth reading. I hope Paxton has more stories in the works.

Kathy:  I sincerely enjoy Mark’s writing and I enjoyed this book very much. This collection of short stories has a surprising bit of everything and quite worth the read. If I didn’t know better, I would think he worked for a retirement community because he was spot on regarding what goes on inside one. Plus he made me very fond of the main character at Shady Acres. I’m glad he said there is more to be told regarding A Warm Body, because I want more. Who is Maureen Nesbitt is just plain fun.

Wendy: The great thing about eBooks is that you can take a chance on a new author without worrying that you’ll spend a lot of money and not like the book. In this case, I’m very glad I took the chance.

The story is a look at the intersecting lives of people in a convalescent home. That sounds like it could be a story of afternoon bingo and jello desserts but instead it’s about elderly people who are still living their lives, rather than people who have gone somewhere to die. In fact, Mike, the protagonist, has decided to turn back the clock as he turns 100. Instead of getting older, he’s determined to get younger through sheer force of will. As he makes his efforts, we get to know him and the people surrounding him.

I read the story in one sitting and if it were longer I’d still be sitting there. It’s heart-warming and emotional at times, but above all it’s compelling. And maybe it makes me a little less fearful of ending up in a convalescent home. 🙂