In a series of discussions over at Elk Grove Patch, I’ve been criticized for my belief that it is very difficult to raise children in a time when adults, be they other parents, teachers, or just random adults in the neighborhood and community, refuse to take responsibility for their own actions and act like the role models they are.  There appears to be a belief that all I have to do is say “no” to my kids, set and enforce limits, and things will be taken care of, regardless of the direction the rest of our community is going in and regardless of what other adults are doing and saying.

Well, surprise, surprise.  I’m not convinced.  I still believe it takes a village to raise children and July 4th provides a great example of the teenage-ification of our community and culture, much to the detriment of those of us trying to raise kids into responsible adults.

When I was a kid, I grew up in a middle class neighborhood remarkably similar to the one I now live in and in which I am raising my two boys.  Back then, there were two aspects to the 4th of July.  First, there were the teenage boys running around in the days leading up to the 4th, setting off firecrackers and a few larger type of illegal explosive.  It was all done surreptitiously and without the approval of parents.  Second, on the 4th at the neighborhood BBQs and gatherings, the fireworks displays, overseen by adults, were almost entirely of the legal variety.  You see, back then, adults still acted like adults and at least tried to act responsibly.

What happens now?  This year, on the 4th, I left the BBQ I was at early and got home shortly after 9:00 p.m.  For the next two hours, there was a barrage of the sounds of fireworks.  The crackle and pop of the legal stuff set off by the family who lives across the street and the boom, crack and night sky flares of the illegal stuff all over the neighborhood.  The pervasiveness and length of the illegal stuff tells me a simple fact.  This isn’t done by teenagers outside of adult supervision.  Instead, it has become a part of the adult supervised neighborhood BBQs, block parties, and get-togethers that are a staple of the 4th of July.

And, here are the consequences in our neighborhood. 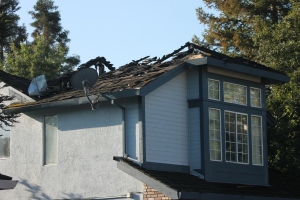 It’s real simple.  Adults are role models for children–theirs, mine and everybody else’s–whether they want to be or not.  I remember a number of years ago, Charles Barkley was quoted as saying that he was not a role model.  He’s right in one respect.  The fact that he was a basketball player didn’t make him a role model.  What made him a role model, whether for good or bad, was that he was an adult.  Or, as Karl Malone said after Barkley’s famous statement:  “Charles…I don’t think it’s your decision to make. We don’t choose to be role models, we are chosen. Our only choice is whether to be a good role model or a bad one.”

Yes, I should just say “no”.  Please.  It is incredibly difficult to raise teenagers to be responsible as they see adults in virtually every environment acting irresponsibly and without a care in the world for how their behavior may be modeled by children.

Trust me, I don’t think I grew up in some kind of idyllic Mayberry world.  However, when I was a kid, I’m willing to bet there was a 75/25 split in favor of adults and parents acting responsibly in front of and around children and that split is now reversed.  This generation of parents has grown up in a world where we haven’t been asked to sacrifice for the common good.  Where, because of the increasing consumerization of our economy and culture, there are increasingly fewer and fewer limits.  As a result, we are raising a generation of children, who are completely clueless with respect to responsibility and limits.

That picture above is just one small consequence of the growing teenage-ification of America.  I wonder how many other families in Elk Grove or in Sacramento are homeless today as a result.  Individual responsibility is a beautiful thing.  I’d like to see a little bit more societal responsibility.

I’ve spoke, blogged, and thought about this … when I retire, which will be right around when my kids are done with college, I want to sell everything I own and live as minimally as possible.  I’ve talked about buying an RV and traveling around the country.  Spending a week here, a month there, time with friends, time with family, time alone meeting strangers and seeing all this country has to offer.

I’ve also talked about the tiny house movement.  Little, itty bitty houses that are as small as 80-100 square feet in size.

Companionship, Intimacy, and the Modern World

On my own, for a long time I’ve thought about intimacy and needs and wants.  I want to be touched, not just physically, but emotionally, intellectually, and spiritually.  I want to experience my life, my friends, my loves, my interests, my fears … everything … at the deepest level possible.  I want to revel in everything.  The good and the bad.  And come out the other side with a smile on my face.  More knowledgeable, more in love, more in touch, more, more, more.

And, then, earlier this week I visited an old man in his final years and he spoke to me of his yearning for companionship.  To have a woman in his life again, more than a decade after his wife passed away.  He spoke of his desire to have, not just any woman, but one who speaks to him, who is where he is at intellectually and with respect to his interests and thoughts.  I asked whether that is a need we ever lose.

I want to have a circle of friends and loves who speak to me, hear me, and are willing to share their deepest darkest fears, their greatest, most embarrassing hopes, laugh with me, cry with me and walk through the world and life together.

And, then, a couple of days ago, I read this and thought about what our modern world is leading us to.  What technology is doing to us.  I am convinced that, while all of these tools and apps provide us with ways to stay in touch, what they are in fact doing is driving us further and further away from each other.  From the real kind of intimacy humans actually need.  The moments when two, or three, or four people sit and talk for hours without interruption from the outside world.  Seriously – when was the last time you just sat with a group of people and talked without one or all of you constantly checking your cell phone?

Our need to be constantly connected is taking away from what is right in front of us.  We now crave immediacy more than intimacy.

I want to turn the phones off, shut the internet down.  I want a simpler time, when people were happy with the people in their lives rather than constantly needing to connect to those who are remote and absent.  We are losing companionship and camaraderie.  We are gaining false relationships and empty communication.  We are losing the world around us and gaining a world that fits into an electronic device.  We are distracted by things that aren’t real and losing sight of the beauty that exists all around us, but which cannot be seen or experienced on a screen or communicated with a keyboard.

I want to say so much more than this, but I’m not sure how to do it.

Yeah, let’s see how many viewers I get with that headline…

Today, the youngest Midget brought home an extra credit questionnaire for his health class.  Yes, he’s taking that class.  You remember it from high school, don’t you?  All of that talk about drugs and sex … so they go out and don’t do any of it.  Anyway, this questionnaire is for a parent to complete.

How old do you think your child should be before having a specific boyfriend or girlfriend?  Why does this age seem appropriate for you?

What are your thoughts on this?  My answer was that it basically depends on the child.  Maturity, responsibility, respect for rules and boundaries and all of that.  And, then the level of supervision involved.  The younger the child is, the more chaperoning involved.  I don’t think it’s possible to say this age or that age.