Feeding the Homeless of Malibu

One of the things I liked about our vacation was traveling along roads I’ve never been on before.  After a couple of days in Arroyo Grande (just south of San Luis Obispo) we headed further south.  From Los Olivos, we got off 101 and took the Chumash Highway to Santa Barbara.  What a beautiful stretch of road and I have no pictures to share.  It’s the hazard of being the driver and also, well, there’s this.  I’m not one to slow down and smell the roses, or take pictures, when we’re on the road.  I’m more concerned with getting to Point B than with what’s between A and B.  It’s a part of me I’m working on changing.  What’s the rush?  Right?

The Chumash Highway runs through the coastal mountains.  Oak trees everywhere.  Horses running free.  A lake.  Lots there to see on the ride.

At Santa Barbara, we got back on 101 and kept going.  At Oxnard we stopped for lunch and, to avoid the traffic as 101 heads into Los Angeles, we took Hwy 1 down the coast, first through Port Hueneme and then right along the ocean’s edge for miles.  It’s dangerous having me drive near the ocean since all I want to do is watch the waves.

On the southern edge of Malibu, we stopped and walked along a beach for a few minutes.  My wife deposited our lunch trash in a garbage can.  While I took pictures, a homeless man dug the bag out and enjoyed the remains of our food. 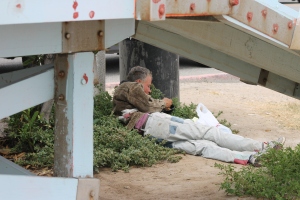 I’m pretty sure the remains of the three rice bowls in the bag provided him with a decent meal.  It’s just a shame he has to eat that way and that we throw away so much food.  Even in Malibu where the uber-wealthy live and play, we can’t find a way to care for people like this guy.

I work in downtown Sacramento, where there are plenty of homeless people.  Many of them mentally ill.  Many are not.  Every time I walk by one I puzzle over what it says about our society that there are so many people who live on the streets.  I don’t expect that any society could ever completely eradicate homelessness, but it certainly seems to be one of those areas where we have completely failed.

3 responses to “Feeding the Homeless of Malibu”